A Panel organized by the Immigrant Entrepreneurship Project at the Business History Conference in Frankfurt/Main, Germany, March 2014

“Virtues and Vices of Business” was the theme of the 2014 Business History Conference, held for the first time in Germany in conjunction with the Gesellschaft für Unternehmensgeschichte (Society for Business History). Immigrant Entrepreneurship Project researcher Atiba Pertilla took this opportunity to organize a panel on “Business and Wartime Patriotism,” examining the dual loyalties of foreign-owned firms in times of military conflict. 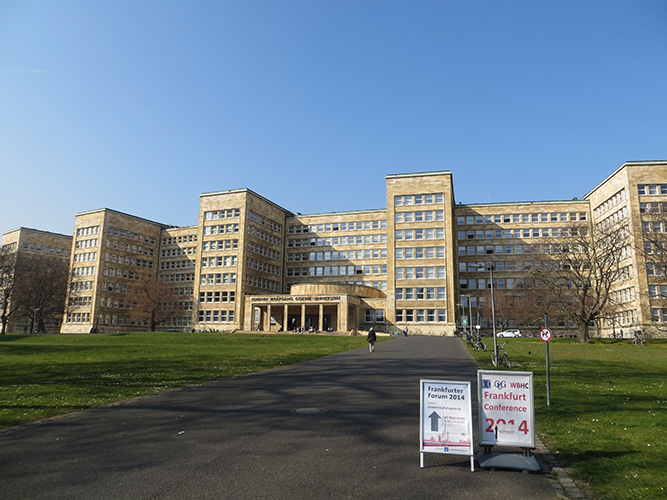 The 60th Business History Conference took place in Frankfurt’s Poelzig-Bau, first the headquarter of I.G. Farben, then of the U.S. Armed Forces in Germany, and today a center of the Johann-Wolfgang Goethe Universität.

Uwe Spiekermann, chair of the panel and general editor of the project, quoted Oscar Wilde’s statement “Patriotism is a virtue of the vicious” to frame the panel’s concept. The panel presented four case studies from the U.S., Germany, and the Netherlands and covered both the First and Second World Wars. Christina Ziegler-McPherson (Empire State College) presented the first case study on “Keuffel & Esser: German-American Entrepreneurship and Opportunity in Wartime.” The company was founded in 1867 by German-American immigrant entrepreneurs Wilhelm Johann Dietrich Keuffel and Hermann Esser, in Hoboken, N.J., and specialized in the sale and manufacture of drafting tools and scientific instruments. After the deaths of the two founders in 1908, members of the Keuffel family, all of them American citizens, ran the 450-employee company. On the eve of World War I, the firm had begun making optical lenses using glass imported from Germany while pursuing further research and development in cooperation with the governmental National Bureau of Standards. Once the war began, the strategic value of optical glass for sighting and navigation (including in submarine periscopes) led to intensive efforts to substitute for German imports. Keuffel & Esser managed to receive lucrative war contracts, even though many of the firm’s employees were Germans or German-Americans who were closely supportive of the German cause and its factory was located almost directly adjacent to the American Expeditionary Force’s embarkation point for Europe. Ziegler-McPherson showed that Keuffel & Esser’s experience presented an interesting case of the American military bureaucracy proving flexible and willing to accept the firm as a patriotic partner.

Immigrant Entrepreneurship Project author Lars Heide (Copenhagen Business School) presented a similar case study from Nazi Germany. In his paper “Virtues and Vices of IBM’s Subsidiary in Nazi Germany,” he gave an overview on the history of IBM and its German subsidiary Dehomag (founded in 1910), which dominated the punch-card business in both countries. After German regulations in the early 1930s stifled foreign trade and forbade the repatriation of profits to the United States, Dehomag deliberately adopted a “German” identity. A new tabulator was developed in Germany and produced in a newly erected factory in Berlin; Dehomag voiced its devotion to the Nazi regime and its leader, and it reinvented the life of IBM’s founder, Herman Hollerith, depicting the Buffalo-born inventor as a heroic German emigrant. These strategies were successful: Dehomag’s business boomed over the following decade, and although the company was placed under state custodianship in 1941, this had little impact. The company collaborated with Axis party, state, and military institutions throughout Europe, but was not accused of direct involvement in the Holocaust and the persecution of Europe’s Jewish population and was able to resume business as usual after 1945. Its collaboration with the Nazi regime was seen by postwar evaluators as justifiable behavior under the conditions of war and totalitarian control.

The importance of long-lasting cooperation between multinationals and German firms was also stressed by Ben Wubs and Marten Boon (Erasmus University Rotterdam) in their paper “Property, Control and Room for Manoeuvre: Royal Dutch Shell and Nazi Germany, 1933-1945.” Royal Dutch Shell’s German subsidiary, Rhenania Ossag, grew rapidly during the 1930s and early 1940s while pursuing a strategy of cautious, long-term cooperation with I.G. Farben, Jersey Standard, and Royal Dutch Shell to perfect the hydrogenation business, which enabled the more efficient refining of oil shale. Although this project at first caused immense financial losses, the seizure of power by the Nazis in 1933 stabilized the market, and high subsidies generated steady profits. Royal Dutch Shell and Rhenania Ossag collaborated with the Nazi regime for reasons similar to IBM/Dehomag, establishing friendly relations with leading Nazi officials alongside their existing industrial partnerships. German officials permitted the foreign company to remain autonomous because they believed the state would benefit from an industrial research program more advanced than that of German firms such as I.G. Farben. 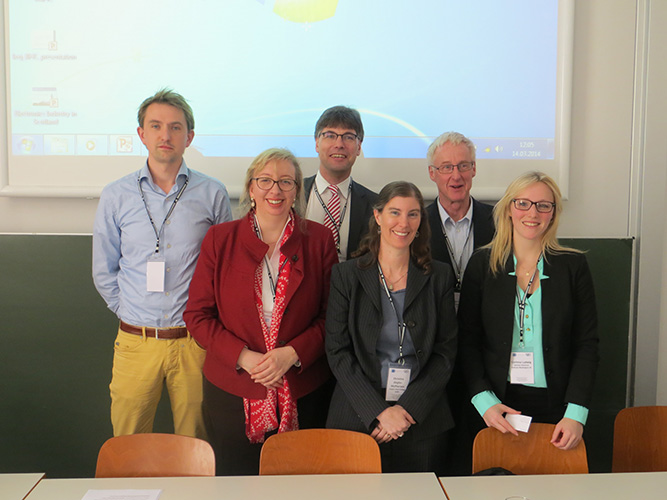 While the first three papers focused on individual firms that maintained their independence, Corinna Ludwig (GHI) focused on “’Confiscation Is Always a Dirty Business:’ Wartime Expropriations of German Companies in the United States.” Overriding private property rights, the United States confiscated German property in the U.S. during World War II in more than 19,000 separate actions. Notably, most of the confiscations occurred after the 1945 armistice and few were canceled earlier than April 1953. Ludwig described the activities of the Studiengesellschaft für privatrechtliche Auslandsinteressen (Society to Study Private Property Interests in Foreign Countries), a group that lobbied for the return of German property, including patents and brands, in the United States and elsewhere. The society used a strategy similar to that following the First World War, when property in the control of the Alien Property Custodian was returned after long negotiations. The Germans were able to bring their cause to Congress’s agenda, but a proposed reparations bill failed in 1954 and the society rejected proposals to compensate only  smaller firms. The German firms ultimately received compensation from German taxpayers in 1969.

In her comment, Stephanie van de Kerkhof (University of Mannheim) stressed the great variety of national practices and concepts in times of severe change in the business environment. In all cases, however, there was room for maneuver and all companies had some negotiating power against the state, even if this was only clear in retrospect. The commentator pointed out that all firms did not act in ideal worlds but each in some way accepted nationalistic and expansionist ideas as part of their business. She emphasized the variety of ethical questions resulting from collaboration and efforts to avoid or mitigate expropriation. The rich and thoughtful comment ended with detailed questions for all the presenters.

The comment was followed by a short and intense discussion among the more than forty audience members. The panel’s detailed studies show that immigrant entrepreneurs and multinational companies exhibit many different variations on the “vices and virtues of business.”