Schumann-Heink (1861-1936) is generally known only as one of the leading contraltos in the early 20th century and as an important figure in the U.S. Liberty Bond rallies during World War I. Spiekermann offered a different view. He presented the diva as an innovative entrepreneur: After having emigrated from Germany to the U.S. she starred at the Metropolitan Opera from 1898 onward and managed to free herself from the contracts with agencies and opera companies to organize her own business. Starting in 1905, she gave 100-150 concerts per year on her own bill. Schumann-Heink was one of the first singers who moved comfortably between the highbrow culture of the opera and the middlebrow culture of musicals and vaudeville. As an entrepreneur, she was always eager to use the newest technologies, especially records, radio, and movies, to present her art and earn royalties. Schumann-Heink attracted larger audiences than any other singer of her time because she performed not only in opera and music halls but also in sport stadiums and open air arenas. In addition, she extended her performances to mid-sized towns and even the countryside, winning fans in the U.S., in Europe, and also in Asia, especially Japan. Schumann-Heink began her American career at the age of nearly forty and as the mother of eight children. Motherhood became an important attribute for her public image and her PR efforts. Although an emancipated women in practice, she saw a woman’s place at home and with her family.

Spiekermann concluded his talk with a strong plea for re-writing women’s biographies of the late 19th and early 20th century from the perspective of business history. One reason for the lack of female (immigrant) entrepreneurs in this period is their misperception only as artists or social activists. The talk was followed by a long and lively discussion, where the biographical case study was queried from the perspectives of gender and business history, but also as an example for the growing importance of music history. Schumann-Heink’s biography will be available on the Immigrant Entrepreneurship project’s website soon. 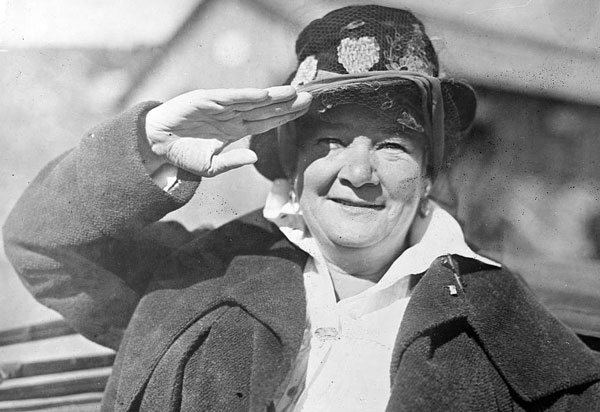 Ernestine Schumann-Heink greeting the U.S. flag at a concert in Camp Funston, Kansas, 1917 (Library of Congress)