Where is Heimat? Can Germans find a new one even in the American West? These were the core questions of a conference in Los Angeles, organized by the Immigrant Entrepreneurship Project’s volume four editor Jeff Fear (University of Glasgow) and Paul Lerner, director of the Max Kade Institute for Austrian-German-Swiss Studies at the University of Southern California (USC). Financed predominantly by the Fritz Thyssen Stiftung, the Max Kade Foundation, and the German Historical Institute, the conference offered an exciting opportunity to compare the well-known German exiles and immigrants of the interwar period with many German-American immigrant entrepreneurs, most notably in the film and entertainment industries.

On February 7, 2014, the organizers, Bill Deverell (USC), and the German Deputy Consul General Stefan Biedermann welcomed the participants and many guests to the Max Kade Institute. In his opening remarks, Consul Biedermann noted that the large German (-American) community in Los Angeles, with at least one-half million members, is quite diverse. He named four groups as its components: Holocaust survivors and exiles, the emigrants who arrived after World War II, the young urban professionals in the entertainment businesses, and the pioneering generation of German-Americans, who had come to California in the 19th century. Despite all sharing a German heritage, these groups did not commonly interact with one another.

Session one, chaired by Marje Schütze-Coburn (USC), dealt with “Intellectuals, Writers, Artists.” Ted Bahr (University of California, Los Angeles [UCLA]) presented ”Weimar on the Pacific Revisited.” He not only discussed the general history of exiled German intellectuals in Los Angeles but reflected on the meaning of the term “Weimar” for those who had to leave their Heimat. Thomas Wheatland (Assumption College, Worcester, Mass.) added a very nuanced analysis of “Critical Theory. The Los Angeles Years.” He emphasized the differences between the Frankfurt School’s New York and Los Angeles sojourns and shed new light on the often complicated relationship between Max Horkheimer and Theodor W. Adorno on the one hand and Franz L. Neumann on the other. Michaela Ullmann (USC) spoke about “A Lasting Legacy: Lion and Marta Feuchtwanger’s Impact on Preserving the Memory of German-Speaking Exiles in Southern California.” She gave an overview both of the large number of German writers in the Los Angeles region and on the activities of the Feuchtwanger Memorial Library. The ensuing discussion centered on the relevance of space and place for immigrants’ experience and work. 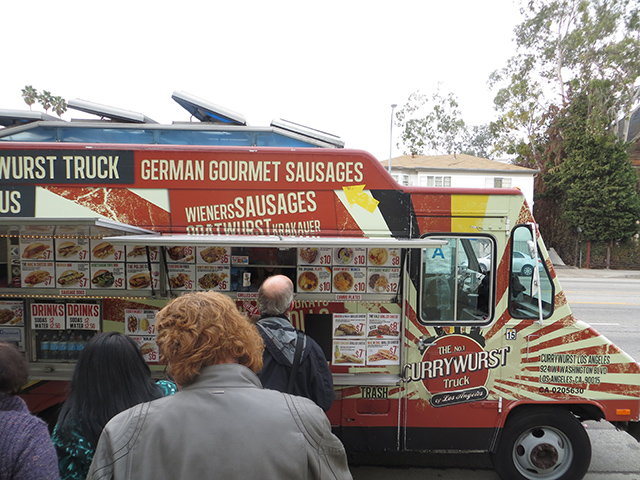 After a culinary break, delivered by the No. 1 Currywurst Truck of Los Angeles, session two, chaired by Bill Deverell, dealt with “Exhibiting the Émigrés.” In the first paper, Karen Wilson (UCLA) provided insight into the exhibition “Jews in the Los Angeles Mosaic,” presented by the Autry National Center from May 2013 to January 2014. Banker Isaias Hellman and the large number of Jewish movie producers were used as examples to discuss the specific flavor of Southern California. Wilson’s intentionally polemical thesis that “Jews made Hollywood, and Hollywood made LA,” was tempered during the discussion by consideration of more specific empirical examples. Doris Berger (Skirball Cultural Center) presented the structure of the upcoming exhibition “Light & Noir: Exiles and Émigrés in Hollywood 1933–1950.” Again, relationships between Jews (both German and Eastern European) and other Germans were debated vigorously.

Session three was devoted to quite a different and much broader group, namely “Immigrant Entrepreneurs in California.” Chaired by Jeff Fear, the session focused predominantly on those German-Americans who contributed to the rapid rise of Los Angeles as the leading metropolis in the U.S. West. The project’s general editor Hartmut Berghoff (GHI) started with a detailed overview of “The German-American Immigrant Entrepreneur Project.” He also highlighted some of the more interesting California-based entrepreneurs, including Henry J. Kaiser, Harry Cohn, Jacob Beringer, and Emanuel Bronner. General editor Uwe Spiekermann (GHI) continued with a case study on “The Spreckels Family in Southern California.” The urban development of Los Angeles’s main competitor, the “one man town” San Diego, was closely linked to John D. Spreckels’ investment in urban infrastructure as well as the beautification and industrialization of the metropolis. Kathleen Feeley (University of Redlands) drew the audience’s attention back to Los Angeles, with her talk on “American, then German: Irving Thalberg and the Second Generation in Hollywood.” Thalberg, the “wonder boy” producer first at Universal Pictures and then at MGM, was able to combine European and American traditions and to anticipate the desires of motion picture audiences. Again, the discussion was intense and challenging: core questions about the Immigrant Entrepreneurship Project were discussed, specifically the differences between German and German-Jewish businesspeople, the meaning of being German when doing business abroad, and the sources for the case studies. Jürgen Kocka (UCLA), one of the guests, asked about the other side of the success stories, wanting to hear more on losses and failures. Finally, the relevance of philanthropy for businesspeople and immigrants was discussed in detail.

These and other questions continued to be debated during dinner at the USC University Club. The main dish, however, was served by Cornelius Schnauber (USC), who shared his memories of Fritz Lang, Fred Zinnemann, Billy Wilder, and many others in his talk “Speak German, You Are in Hollywood: Episodes and Experiences with German-Speaking Exiles and Émigrés.” [Sadly Prof. Schnauber passed away only two weeks after giving this lecture. Born in Freital, Saxony in 1938, he came to the U.S. in 1966 where he became a professor of German literature. He founded the Max Kade Institute in Los Angeles and headed it for many years. An advocate for German-Jewish reconciliation, Schnauber worked broadly on the German exiles in southern California.]

The second day of the conference was held at the Villa Aurora in Pacific Palisades. This mansion, bought in 1943 by Lion and Marta Feuchtwanger, was once a center of the intellectual life of the German émigré community. Following its restoration, today the villa hosts the 22,000-volume Feuchtwanger Memorial Library and is an international meeting place for artists, filmmakers, musicians, and writers. Villa Aurora director Margit Kleinman welcomed the group and provided more details on the history of this German-American landmark.

View of the Pacific from the garden of the Villa Aurora

Session four expanded the conference’s perspective to “Exile, Science and the State.” The session’s chair Jonathan Steinberg (University of Pennsylvania) began by expressing gratitude to the German State, which financed the restoration of the Villa Aurora and opened its doors for the conference. Judith Goodstein (California Institute of Technology) quickly returned the focus to history, presenting “Caltech’s German Connection.” Starting in the early 1920s, physicist Robert A. Millikan recruited first-class experts from Germany to help develop the sciences in American universities and to teach American students at Caltech. Paul Epstein, Theodore von Karman, and Beno Gutenberg were the most famous examples of this strategy. After this first generation, Caltech focused more on recruiting their own graduates and fellows, such as Linus Pauling. Anne Schenderlein (University of California San Diego [UCSD]) discussed her archival research in her talk on “Making German History in Los Angeles: German-Jewish Refugees and the West German Foreign Office.” Focusing on Jewish refugees in Los Angeles, she analyzed how they found a new Heimat in California and how this group interacted with the diplomatic representatives of the Federal Republic of Germany. Both the Jewish community and German diplomats profited as a result of their interaction, the diplomats through their policy of pushing reconciliation and the Jewish community through increased restitution. Although fraught with tension, post-Holocaust relations between Germany and Jewish émigrés were not only the result of negotiations between Bonn, Jerusalem, and New York but were also influenced (in the U.S. at least) by individuals on the political periphery. The session concluded with Giles Hoyt’s (University of Indiana) presentation on “Max Kade: Pertussin and Philanthropy.” Kade, a German-American immigrant entrepreneur spent much of the fortune that he earned in the pharmaceutical industry on improving German-American relations after World War II. Although a very prominent figure, Kade’s biography still offers many opportunities for further research, particularly because he was such a modest and private person.

Session five, “Film Worlds,” tackled Los Angeles’ image as the dream factory for the world. Those who only had Hollywood on their mind were surprised by Nicole Neuman’s (University of Minnesota) contribution “Home Sweet Heimat: Finding Germanness in LA’s Moviegoing Culture.” She analyzed the history of the La Tosca Filmbühne, a Los Angeles movie theater, which presented German-language films, mostly in the Heimatfilme genre, to a German and Austrian immigrant audience from the late 1940s to the early 1980s. The movie theater offered the idea of an ideal Germany that transcended the legacy of National Socialism and the controversies of democratic West Germany – a dream world of the fatherland that still existed for many who came to the U.S. after World War II. Margrit Frölich (UCSD), in contrast, presented Los Angeles as a typical American place – in contrast to the more international New York – in her paper “Liberties and Constrictions: Émigré Producers in Hollywood Motion Pictures.” This paper analyzed the movie industry in the 1940s in particular, using producers Joe Pasternak, Erich Pommer, and Sam Spiegel as biographical examples. Finally, Tom Kemper (USC) looked at another gatekeeper business in his paper “Sue Mengers and the Rise of the Hollywood Agents.” While producers lost importance in the postwar era, Hamburg-born Sue Mengers represented leading actors associated with the ”New Cinema” movement of the late 1960s and remained a force in Hollywood until her retirement from International Creative Management in 1986. The discussion not only added biographical examples but also focused on Hollywood’s continuous need to change in order to remain dominant in the global film business. 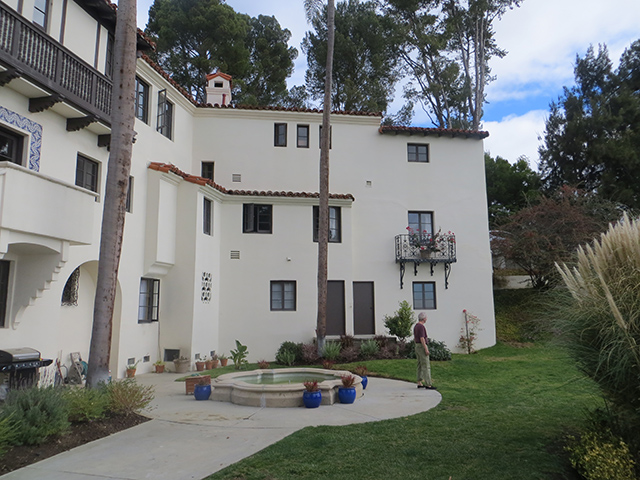 Garden and left wing of the Villa Aurora

The last session, entitled “Weimar on the Pacific Revisited: Exiles between Two Worlds” and chaired by Paul Lerner, again broadened the scale and scope of German immigrants. Marion Kant (Cambridge University), in her presentation “For the Time Being a Row of Palm Trees Is Nothing but a Nice Façade,” offered a challenging and paradoxical analysis of the paradoxical reception of theatre and dance brought to the United States by émigrés and exiles. Collective undertakings, like theatre, suffered intensely in exile and the German concept of theatre had no real chance in an entertainment culture. In dance, however, the modernism supported by the Nazis (exemplified by choreographers like Mary Wigman and Hanya Holm) was integrated into the U.S. scene. Next, Cristina Stanca Mustea (UNESCO, Paris) focused in her paper “No More Crossings: Carl Laemmle’s Last Visit to Germany” on the Universal Studios founder’s interactions with Germany. In 1918 and 1919, he produced anti-German Hetzfilme, re-established Universal in the German market in the early 1920s, and suffered the banning of his anti-war movie “All Quiet on the Western Front” in Germany in 1929. As a consequence, he began to bring his relatives and many other Jews out of Germany to the safe haven of the U.S. The final paper was given by Joachim Schlör (University of Southampton), who addressed “Werner Richard Heymann in Hollywood: A Case Study in German-Jewish Emigration after 1933 as a Transnational Experience.” Despite all the musical exchange between Europe and the U.S., even a leading composer, like Heymann, could not continue his work in exile. Rather, he had to compose for the film music market, where artistic integrity was often compromised by the studios’ demands. The market triumphed over the individuality of an artist; and the composer, although very successful, suffered abroad, missing the artistic opportunities of early 1930s Germany.

The conference offered broad and challenging perspectives on the immigrant entrepreneurship experience. In spite of their common national background, there was not much interaction with or welcome from earlier generations of German-American entrepreneurs and their descendants with the mostly Jewish and sometimes communist newcomers. Although the movie industry offered many opportunities for the emigrants, even those who succeeded did not really find a new Heimat in the West.